Senegal, the first country in the “other Africa” as Christian said. The first country after the “Great Arabic Belt” as he called the countries inhabited by Arabs. The three of us walked through the border town, looking around. The sun beat down mercilessly as we were puzzled by searching currency exchange office – I still had remains of ougiyas and the guys were carrying euros – all of this had to be changed to CFA – the currency of the West African Union. Cefa as they call it. But no matter that there was the middle of the day – the banks were closed. We have noticed the post of gendarmerie and bored police officer at the entrance. We went to him, asking about place where is possible to change money. He calmly took out his phone and called someone and said: “Wait”. Border town, yes. We dropped backpacks to the ground and waited. Nearby, on the banks of the Senegal River a few women washed things pouring dirty water into the river. Some children swam in the same place. It was quite funny to watch it remembering the instructions of the guides “do not to swim in local waters in any case”. 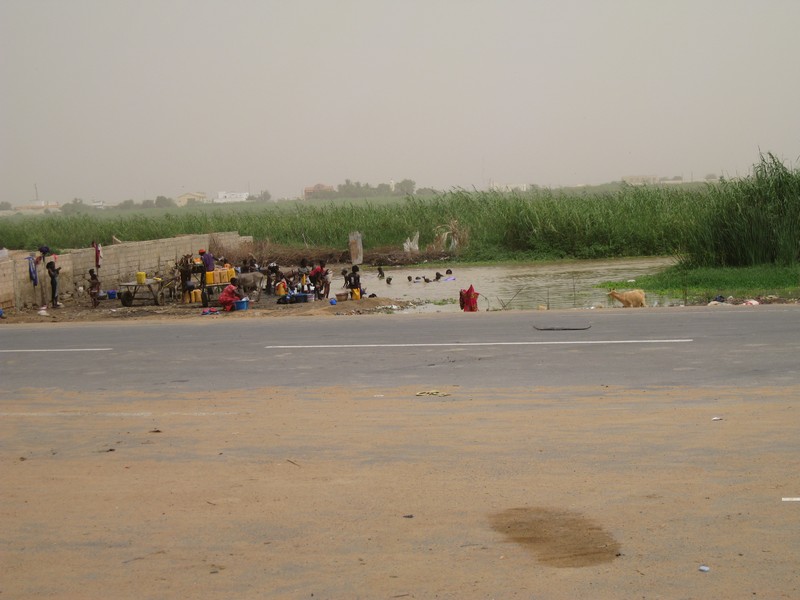 Guys sighing from time to time about the slowness of the exchanger but I learned the Zen, continuing to train myself that I often have to wait for a long time during my way in Africa.

Nevertheless, changer arrived and we exchanged currency for a reasonably good rate. Then we got to the “bus station” where we were to split up. Mark on the bicycle went to Dakar, and me and Yury was going to Saint Louis where I was supposed to meet with Suleiman after Tabaski. 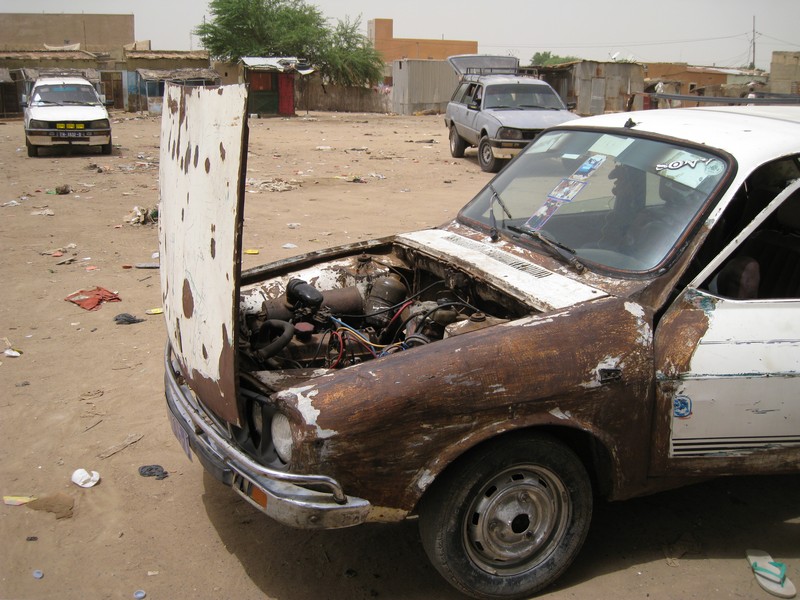 After little haggling we reached agreement with one of the drivers … and waited again. Because in the car still was a place for another passenger, and what we have to do? That’s right, we have to wait. After a couple of hours we were finally able to advance in the direction of Saint-Louis on a deadly-smoking diesel rusty tub that could hardly move without assistance. Almost immediately we were stopped by a police officer who saw the white people in the car, us. I tensed, remembering complains of Belgian couple on the border that every cop in Senegal felt obliged to rip them off. But the officer checked only one passport, looking for entry stamp, and then returned the documents and wished a happy journey. Good start.

Senegalese life fled behind windows. Piles of garbage was significantly lesser, and a lot of green colors of nature. The eye accustomed to the desert could not get enough of the landscape. The road was of excellent quality and I fell asleep until Saint-Louis. After landing on the central square we stomped through half the town waving away pesky taxi drivers. After an hour or more, we arrived at the Auberge Pelican – cheap mini-hotel on the oceanfront recommended by many travelers. It has very cute territory, and the cheapest bungalow we were able to rent cost us 7500 cefa for two (about 6 euros each). 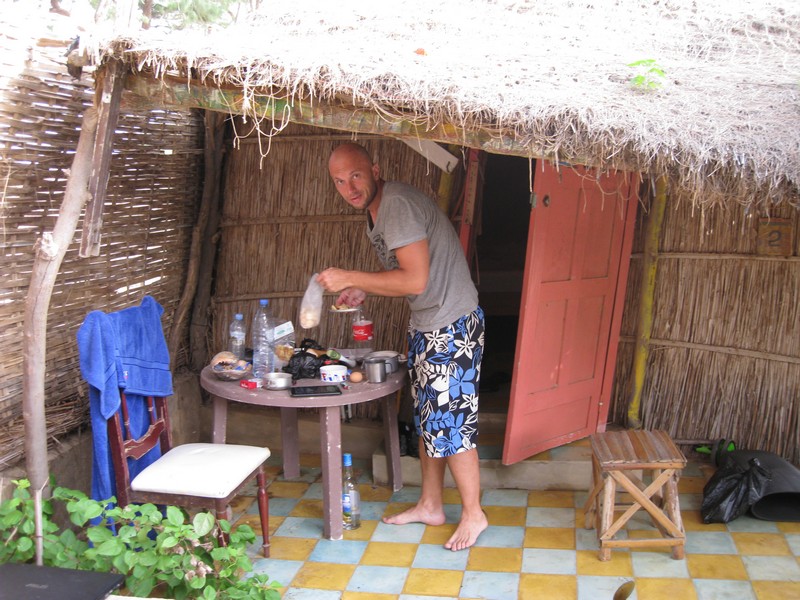 We went to a bar with view of the ocean and reception girl brought us beer. La Gazelle, local one. Light, 4.2%. Cold beer for the first damn long time. When was the last time? When I met the German on an orange van. I collapsed in a chair, drank, smoked, and looking at the ocean realized that happiness is somewhere here. Accompanied by the rustle of the wind and the sound of the waves, I looked at the sun of bluish color translucent through the thick veil of moisture. 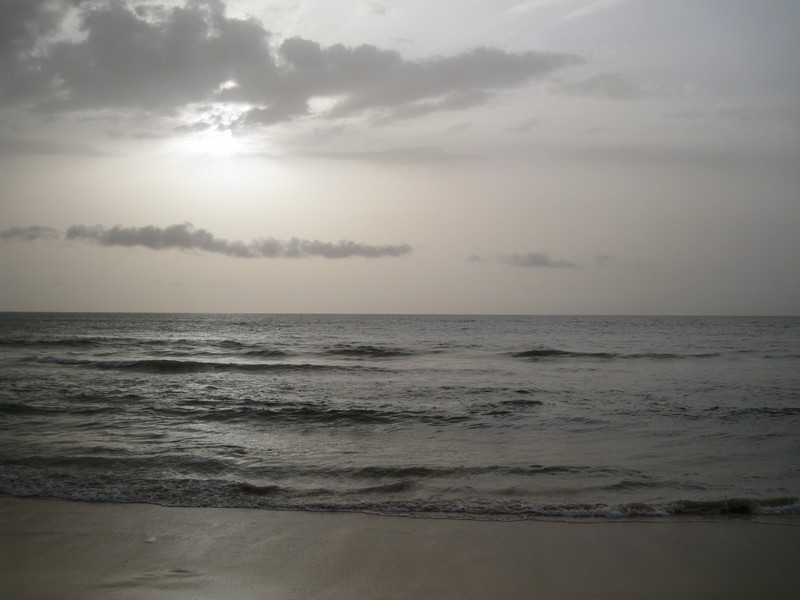 The next day we went to wander around the city, to buy food and local SIM cards. Local life is strikingly different from the Mauritaninan. Senegalese much more funny and emotional, women in dresses and not wearing head scarves, and this bright light Senegalese music everywhere. Rubbish was still omnipresent but at least not in such quantities that you have to walk on it. Fishing boats, an incredible number of them, painted in bright colors bizarre patterns. Local lorries trying to contempt the famous Pakistani trucks for coloring and quantity of jewelry. And the omnipresent humidity. At midday it was not easy to carry it on, so we postponed the idea to go to the beach for the evening. 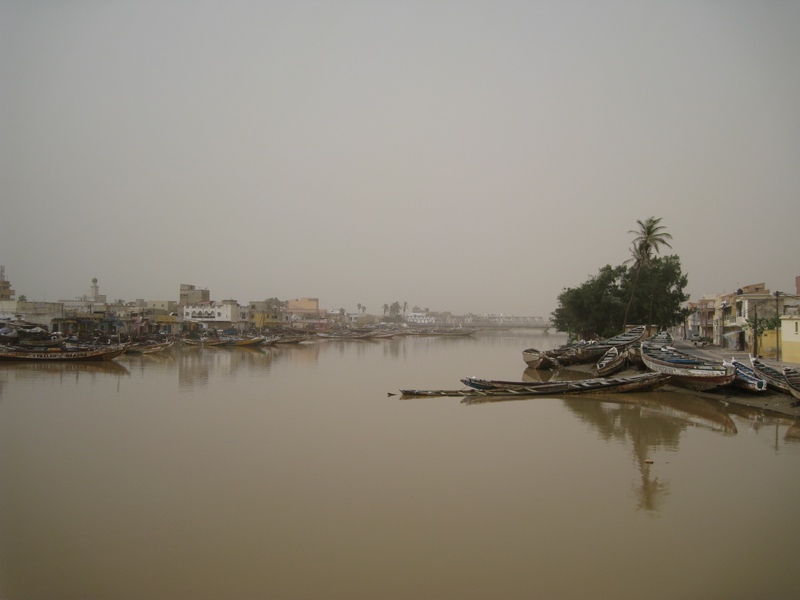 Beach is worthy of special mention. We visited it in the evening. The long sandy beach strip was divided into improvised soccer fields as it was visible to the eye. None of them was not idle – the players were everywhere. Everywhere around Senegalese guys running back and forth doing exercises. What respect for the sport, I thought, sipping from a bottle labeled La Gazelle. And what kind of disregard for the nature around. The beach was full of garbage. Empty bottles, plastic bags, plastic containers, the remains of slaughtered animals, the corpses of cats and dogs… The ocean was incredibly warm, very rare gift of nature to the locals – but no one is interested, no one was swimming. Because in the water swam the same ubiquitous plastic and animal remains. Abomination. We hurried to get out of there. It is best to observe the ocean from a distance.

I stayed in St. Louis for several days, waiting until Suleiman will be free, escaping the heat with ice-cold beer and local rum of disgusting taste. Finally, Suleiman arrived and we gathered to rescue lorry from the border. Yuri went to Dakar – we said goodbye and agreed to meet later when I get there.

Suleiman had to get the passavant, a document which allows to travel on your vehicle in Senegal (mandatory document for vehicles over ten years old since import of old vehicles is forbidden in Senegal). We had to get the same for me as well. In St. Louis, Suleiman had been familiar with one transitier, which prepared a permit formalities for us. Permit issued by the local customs colonel who was not in a hurry to break away from his business for us. To wait again. 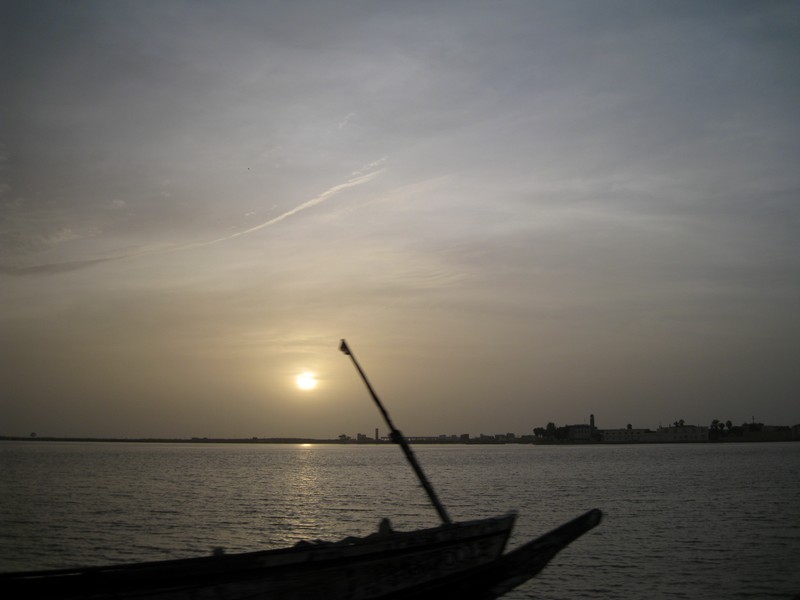 Finally, permission has been obtained. At the beginning of the night we arrived in Diama to take our lorry. First I opened the door of minivan and inspected the contents. To my delight everything was in place. The bike and things were left untouched. Amazing. After another half an hour of polite conversation with the customs we have finally been released. Hooray! Straight from there we went to Dakar. My passavant was issued only for 48 hours and I had to extend it in the central customs office in Dakar, so it was impossible to lose time. I have yet to find a tire.