Little disclaimer: The humidity of this area killed my laptop. It was cheap and old but still a pity. And what is most important – I have no longer any possibility to write. This is the last text, written on it (thanks to good habit to keep it all in the Internet). Rest in peace, Acer.

… Cheap shitty hotel – there was no better description of this place. Yellowish light, ragged walls, creaking ceiling fan, and some American thriller clattering of paunchy old TV in the upper right corner of which is directly on the glass of picture tube is scrawled “Usama Ivory Hotel” – funny stealing protection. I’m too tired to look for other place. Riding gear hangs at corners of the room for drying as I lay on the creaky bed sipping a Star – a local beer, Nigerian production. Looking around everywhere you can see traces of the colonial past. English wall sockets not suitable for standard plug, two taps in the sink (though useless, because the hot water was not here for a long time), toilet cistern with a typical rotary sswitc… I decided to finish off the battery of my notebook and engaged texts.

My acquaintance with Nigeria – a country inconsistencies – began respectively contradictory. On the border of Benin local Beninese border guards tried to get some money from me. For just to put a leaving stamp in my passport. I can understand the logic in the creation of barriers to entry into the country – after all if the traveler arrives at the border of the country, he is definitely interested in getting into it. But in the creation of obstacles to the exit … I behaved in the usual way. I stoodIleaning on the pillar staring at the border guard and smiled, showing that I have a ton of free time, so we can examine each other before the end of the world. Still hoping for something a border guard finally gave up when I bought a bottle of water from the passing trader, sipping with the undisguised pleasure. Recognition of his own defeat is not too impressed by him, so he found a compromise – “the next time”. While he stamped my passport, I nodded in agreement – yes, of course, the next time, definitely. Mentally prepared and gathered for a huge pile of impediments on the other side, I have entered the territory of Nigeria. And contrary to expectations – only 15 minutes passed four customs office. The customs on arrival, then complete the questionnaire, temperature measurement and demonstration of a certificate of vaccination (Ebola and yellow fever are not asleep), and departure. Severely-looking officers of different types with scarred faces greeted me, shook my hand and smiled. Welcome to Nigeria. English speaking country. I was glad that finally I can enjoy socializing in full, without building scanty phrases from my knowledge of French. At the exit of the customs, I was attacked by a pack of beggars, but it was not on their ability to catch up with the motorcycle.

I drove half of the border town and stopped to buy water and to exchange money. I had to change remains of the already familiar francs CFA, which ccompanied me since Senegal for naira – the local currency. I turned to the people sitting in the shade of a tree and was very kindly greeted. Money can only be exchanged at the border, they said to me, you have to go back. I really did not want to go back to a very insistent beggars and did a long sigh. Accurately guessing the cause of breath I was offered a seat on a bench in the shade, until one of this friends took my money and went on his moped to the border, to change. I did not resist. Even if this guy wanted to cheat me – the remains of francs is not too big loss. The second of his comrades brought me a bottle of cold water. I promised that when the money will be exchanged, I’ll pay for the water but he waved his hands and said, “Welcome to our country.” Soon the first man returned and brought the money for excbrought. I guessed to take any money for his help and he just refused. I sat on the bench with them, smoked, found out the road to detour Lagos to not participate in its wild traffic and hit the road. So began my acquaintance with Nigeria. Everywhere no matter where I was before, all around at the mention of Nigeria told that there are very dangerous and almost wild men. However, it turned out to be quite the opposite. Further about it. 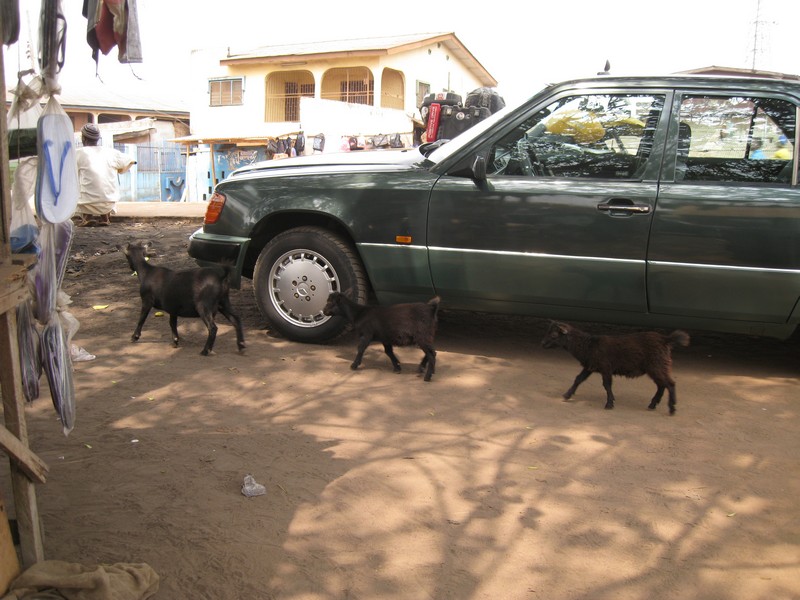 I moved to Benin City. According to the original plan, I had to flypass Nigeria in two days. Fearing all sorts of rumors about the total rampant crime in this country I was planning to carry out two steps – to Benin City, and after spending the night there – to Calabar. Grab there visa for Cameroon and farewell to Nigeria. I go on the road and was immediately stopped at the checkpoint. I was prepared to attempts of corruption, however, contrary to expectations, the police checked my passport, and once they realized that I came on a motorcycle from Russia – began to ask permission to take a picture with me. Each got a smartphone and everybody for few minutes took the pictures of me on the background of a motorcycle. 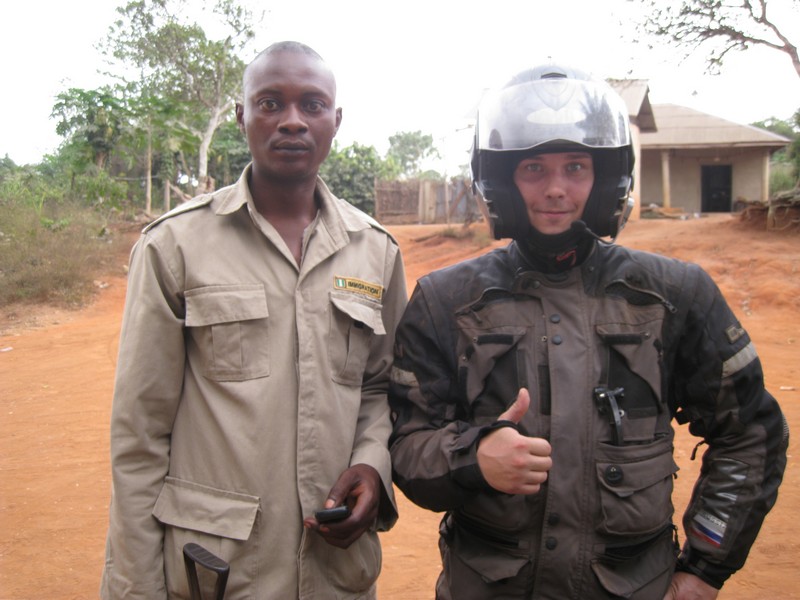 Then they wished a happy journey and let me go. Absolutely the same situation was repeated three more times over three kilometers – apparently border traffic likes to carry contraband, so every kilometer there was a checkpoint. I was glad to talk with local people, but each such stop takes time, and counting the passage of the border, which has taken away a certain time, the chance to get to Benin City before dark melted with each checkpoint. I grumbled on this subject myself, but fortunately checpoints were over, and under the wheels finally run the unstoppable asphalt. The road was excellent which gave me confidence that I’ll get to my destination on time. I was told that I should not under any circumstances to drive in Nigeria by the dark, and … of course, I broke the rule. 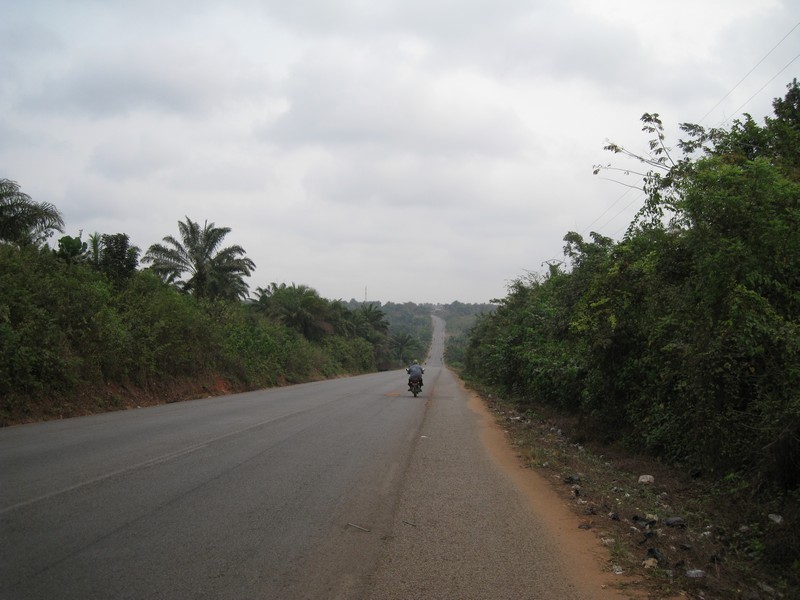 The first reason was the weather. Somewhere in the middle of the road came the sandstorm – I was wondering how can there be dust when all around is overgrown by bushes and trees but the fact is a stubborn thing. Visibility was reduced to a few meters, and wind gusts rearranged on the road my bike very hard. Dust gets everywhere, grind the nose and mouth, even wearing a helmet, but there was no choice but to go on resisting elements. At one point, I asked myself, “Could it be worse?” And the answer came almost immediately – the dust replaced by the water. Water streams rained from the sky hitting hurt my hands without gloves, dust suddenly turned into mud. Down the road came rushing rivers. There was nothing to do with that, so I hid under a huge tree on the side of the road and waited. After around 20 minutes when I was already dripping wet someone’s invisible hand turn off the tap, and in just a moment the rain stopped. Later, rains caught up with me a few times but fortunately not as horrific scale.

The second reason was traffic. There is almost no traffic rules here instead of “bigger size” rule. Which means – the right one is with the vehicle of larger in size. And the motorcycle, respectively, on the lowest rung of the “food chain.” And when one truck from the opposite direction starts to overtake the other truck – he just does not care whether there is someone on the road if it is not another truck. When you encounter this multi-ton machine of buzzing and blinking with its high beams – there is nothing left but to catapult to the bush. The same goes in the same direction – if not to mark yourself by long horn overtaking someone – you’d be just ignored. After a couple of such cases enlightenment came to me, and I began to significantly slow down the speed if the situation is similar to that described above. What, after all, slowed me down as well.

I arrived at Benin-city after dark already deeply wildly tired. The original plan “to come before the dark, to buy a local SIM card for the internet, to find a suitable place for the night” failed miserably due to lack of strength. I just drove in a pair of cheap hotels near the track, identify local lower ceiling price (3,000 naira, 15 euro) and stayed at the next hotel. And here I am, in the company of a humming fan and grumbling TV, eating rice with spices and wash down by this ice-cold beer. Something which gave me some relaxation.

Login with your Social ID