*through the crackle and hiss of white noise from the speaker of the radio accompanied by wistles of the wind voice appears, faint at first but becoming more distinct*

…very…sa-..heh…xpectedly happened my first New Year on the road. That feels unusual and strange. Without traditional mandarins, champagne and stuff. On the hot afternoon sun and temperature of 35 during the day. With dusty winds and ice water. In the land of Honored People.

Time to take a look back. 13 countries and five months of travel behind my back now. As usual for me – everything went absolutely not according to plan, but it’s for the better – dash all those plans. I had stuck a lot, but even that was a benefit – allowing me to deeper explore the surrounding people. Africa – it’s an amazing place, though it requires getting used to. Here, I can say, the real journey started. This is an amazing continent that can not be described in few words. Land without stupid prohibitions and with peculiar people mostly looking at the world with an open soul and spontaneity.

During my wanderings I met a lot of people, both locals and travelers, learned a lot of stories and destinies from them. And told mine countless times. People, emotions, feelings – that’s what I went out for. And only during the way you can meet these congenial people. All this slowly changing me, invisible and imperceptible, and that is one of the journey’s goals.

The road has not been smooth. There were moments of despair and unexpected risings – for the last in many respects thanks to those who supported me and believed in me. And thanks to the Positive, of course. Thank you all, guys. I wish you a new year of adventure and plenty of luck. Movement is life. Follow your dream, whatever it may be. Dream big. Take care of loved ones and relatives. And good luck.

Will meet you in the next year. Desert Capybara out. End of connection.

Bobo-Dioulasso. Andrej went to micro-safari with one of the guests who rented his slovenian army truck for this purpose. I packed up, said goodbye to Shpela and dogs and went back on the road in the direction of Ouagadougou. A stretch of road of 360 kilometers is nothing special except for the incredible amount of speed bumps. And it was definitely not the main thing.

A couple of days before Andrew introduced me to Moussa. At first I was confused when absolutely burkinabe local elder man starts to speak with me in Russian. The noble-looking, with a sharp twinkle in his eyes, obviously young at heart, regardless of age. During Soviet times Musa studied in Chisinau, and then lived in Baku and Odessa. Truly – almost a character of bearded anecdotes. Musa was engaged in the development of the agricultural sector (which he studied in the Soviet Union), and he lived in Ouagadougou, and immediately invited me to stay with him. I was not going to visit the capital of Burkina, but it was hard to refuse such an offer. Looking ahead to say that speaking in Russian with the indigenous African is still continually tearing all the possible patterns in my head. Moussa recalled the Soviet times of his life with warmth and nostalgia, telling a lot of stories from his student days, and life in Azerbaijan and Ukraine. Behind his words was felt of true spirit of Peoples’ Friendship. Everybody for everybody. Without malice and hatred. This had me a very strong impression.

Exactly on the eve of my arrival in the capital, the country held elections. The first elections for the past 27 years, when the country was ruled by a president who altered the Constitution for himself. Suffice it to recall Thomas Sankara, the African Che Guevara. In view of this circumstances the situation could spiral out of control, but surprisingly everything went peacefully and calmly, with the presence of international observers, without provocation and so on. Population reacted responsibly to elections, and that is why in Ouagadougou I was first greeted by a friend of Moussa – Ane, because Moussa went to his hometown to take part in the vote there. Ane studied in Chisinau too, as a construction engineering and, of course, also spoke Russian.

We went to visit Ane’s house but before we stopped in one small neat restaurant. “The first debt of every burkinabe is to feed and give water” Muossa’s wife said, “Here, we share a meal with everyone. If there are people in need around – we share”. Later I occasionally met children begging for food, but I think it’s their way of earning while their parents are at work. Africa … Ane ordered, in my opinion, the best chicken I’ve tried for the whole journey. Before that, in Bobo, in one of the bars me, Evgen and Andrej managed to order a chicken which is preparing “here and now”. “Poule biciklet” – a chicken-bike as it is called here. No meat just bones :) Here, chicken turned out to be meaty, juicy and cooked as it should in a beautiful sauce and vegetables. And beer, local Brakina that brought peace to my body after a road.

After a brief visit to the house of Ane, we went to the house of Moussa who was still on his way back. I was provided with the bed in the room of his son. Bed! For the first time in the last two months I remembered what it is! Oh, how I slept. Royally! I sprawled across as a star and dozed till next noon.

The next day Moussa went back from work and we got to the city to drink beer and have a chat. Around the same time I got a call from Andrej from Bobo and he said that Moussa had recently bought a new house, and it is necessary to deploy the power supply system by solar panels. Andrew needed a companion, and that is me. Job! A total of three days and a small cash but still. Moussa smiled conspiratorially and nodded his head. Yet in Bobo he promised me a job and kept his word. I was full of enthusiasm.

The next day I got a message from a traveler from Belgium named Toon, who arrived in Ouagadougou. He know about me from one of the guests of Andrej in Bobo. We got into the city, and I learned that the joint West African visa (including the Niger, Burkina Faso, Ivory Coast, Togo and Benin) are still exists, and more than that – relatively cheap (25 000 CFA). It was on my hand, given the fact that I did not have a visa for Benin, and Togolese visa should have ended after a few of days. Now, instead, I can get united visa which greatly simplifies my way to Nigeria. We also went to the local market with Toon, where I learned that you can sell at a profit even ten-years old button mobile phone from Europe. And after all I realized that the bearing in the rear wheel of my bike finally died after 60 000 kilometers . Very bad news.

In the following days I worked with Andrej on deployment of solar panels in the new house of Moussa. The mood was fighting and I was riding on the roof with joy and tinkered with electronics in the house. 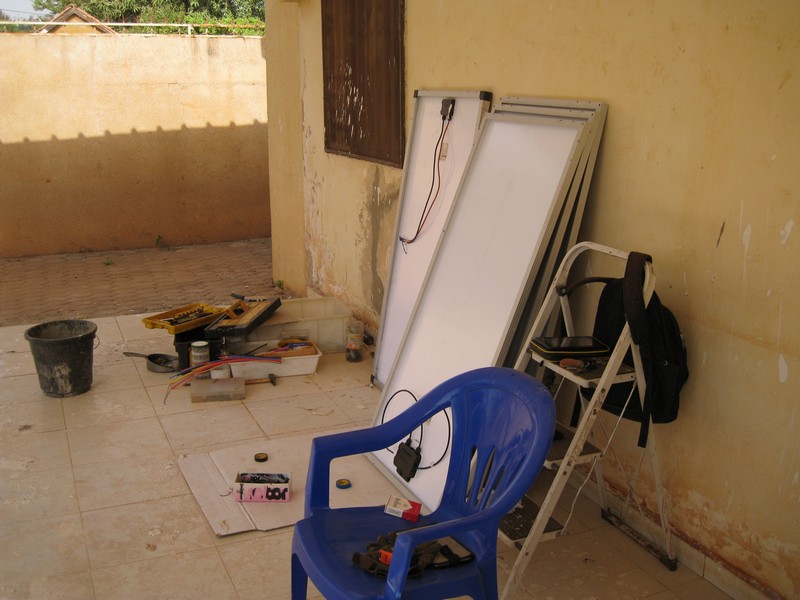 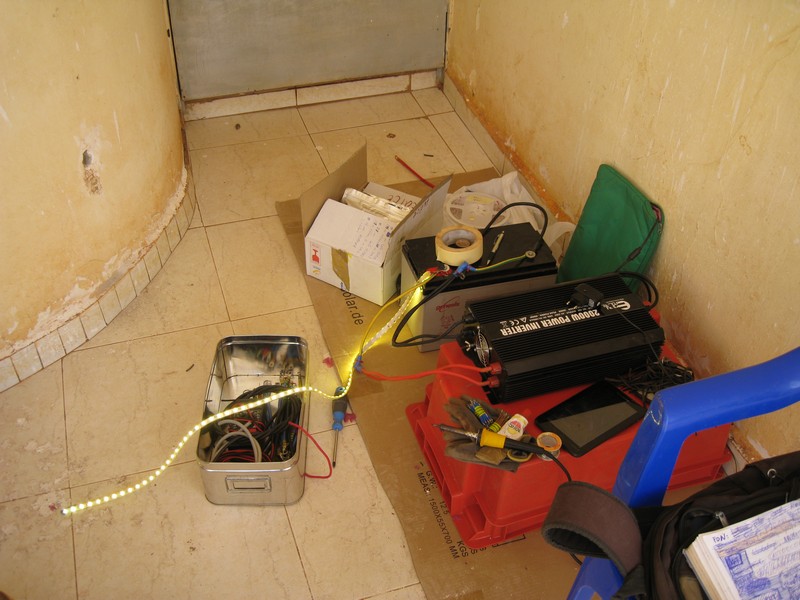 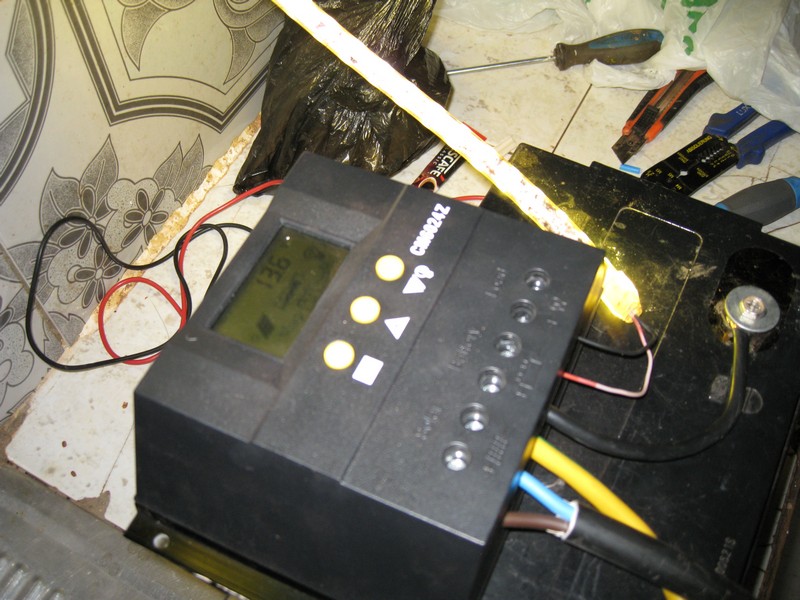 My job, from the top: 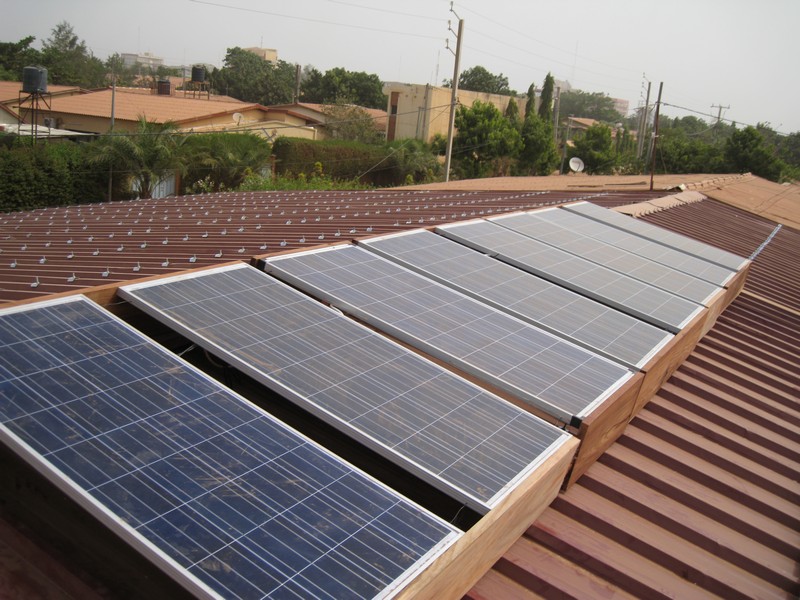 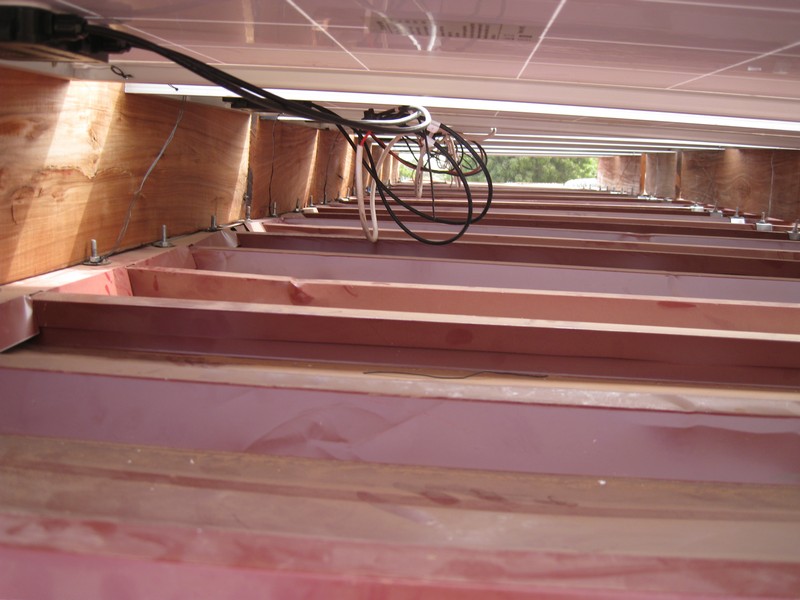 After work we were rescuing ourselves from the scorching sun in a street diner with three dusty chairs and ice-cold beer, and chatted. About the world, about people, about transport and travel. Andrej began to travel since 17 years old and managed to get on all continents and take participation in many avantures, like “human shields” in Baghdad during the bombing of Iraq. His stories were filled with humor and often based on the principle of “we’ll go there and we will see on the spot”. Amazing guy.

Along the way, I tried to find the appropriate bearing, but even with the assistance of a local mechanic, friend of Andrej, and visiting all the possible habitats of bearings searches were not successful. It seems not very rare size, but…

During searches I did a couple of shots of the city. 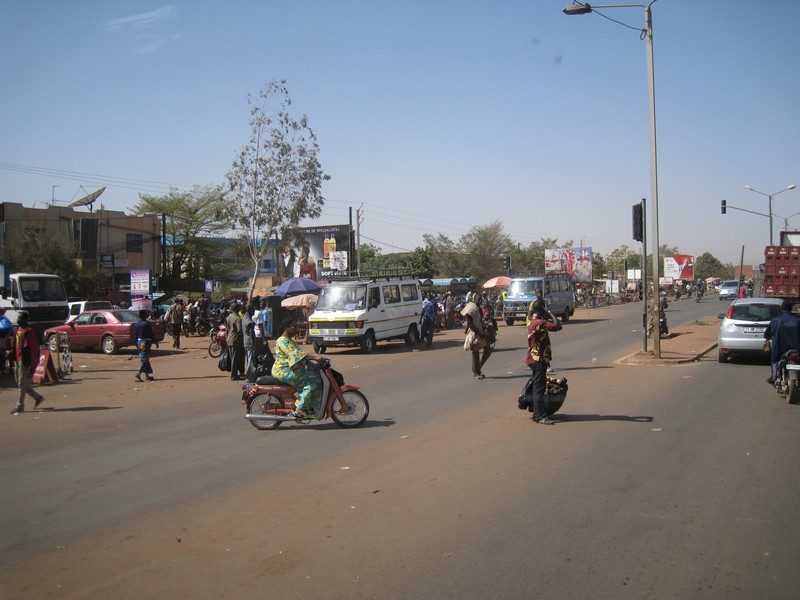 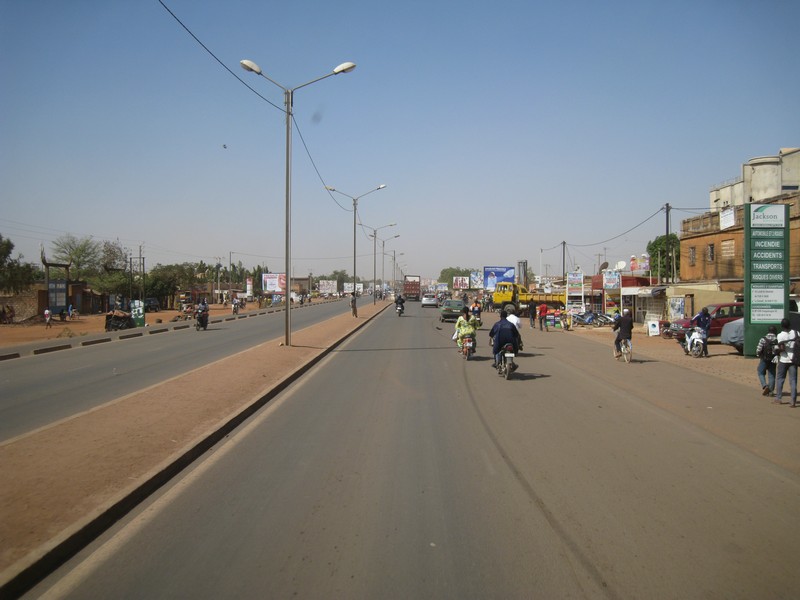 Everything is good with that man, just an afternoon nap: 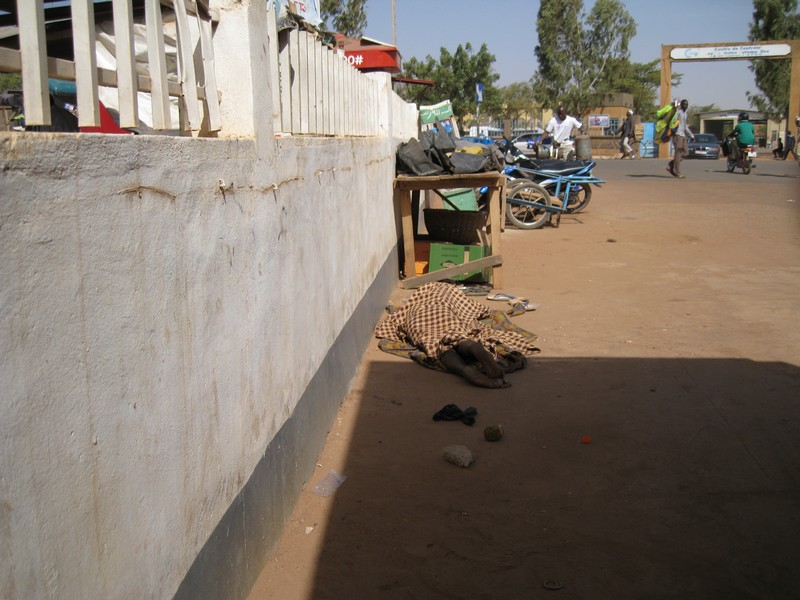 And then I received a letter from the PM-Garage. These are great guys who are engaged in equipping or re-equipping suspension of motorcycles in Moscow. Many riders who are engaged in motorsport, drive on the track or doing enduro rides, constantly use the services of this company. They can do almost everything. PM-Garage offered me a revised and adjusted set of shock absorbers on my bike (!!!!), and asked if I have any problems (!!!!!). I complained to the bearing, and they offered to send it too! That’s really true, you never know where you find and where you lose. Such matches and coincidences are sometimes even frightening a little. However, happy ending has not happened yet, as the cornerstone of a question is about the delivery. Russian Post does not agree to send parcels to Africa, EMS too. So much for the ” we sending parcels all over the world”. And DHL or DPD asking crazy price for delivery. So, the question is still open …

On the last day of Andrej staying in Ouagadougou, Moussa invited us for a meeting of friends. We had no idea what is the event but for Saturday night it sounded good. And how big was my surprise when we arrived. I do not know as it is officially called. A Club. Maybe. In Burkina Faso, there is a club whose members are somehow related to the Soviet Union, and now Russia. Burkinabe people who studied in the Soviet Union. Honorary consuls of Russia. Russians living and working here, and their wives. And everything they say was in my language! And kitchen, russian kitchen! Borscht, cabbage rolls, mashed potatoes with meatballs, oliviers, jellymeat, herring under a fur coat (last I can not eat because of allergia, but still!) And much more! These dishes are common for everyone who lives in Russia but for me it was just some kind of paradise. Food to which I was so accustomed, and which I missed so much. Enhanced by variety of drinks, among which I would prefer our cognac, it has caused an unprecedented euphoria in me. And all this is surrounded by mature held wise men who understand, speak my language, though they are different and interesting. In our land there is not even the embassy of this country and here are a club where people remembering their time when they studied and lived with us. At such moments, you realize that the Peoples’ Friendship has no boundaries at all…

..So in my mind I have to draw the equation with a bunch of unknowns. There are means to go further, but detail is needed to somehow teleported here. The original bearing that BMW may bring here a few days is an unrealistic amount (480 euros against a good analogue for $60). Moussa insisted that we celebrated New Year together. Visa to Nigeria left me only few days if I will stay. And most importantly – a great desire to greet the new year with my one and only beloved, but a complete absence of the possibility to implement it. Plane tickets worth quite cosmic money… Is there a miracles for the New Year?