Ferry again, this time from Malmoe to Travemunde.

But this is for now, and I warmed with Jagermester, which is travelling with me all the way from Finn borders. And as for previous days… I have no words to describe… But I will try.

… I arrived in Stockholm harbour, where for the first time passed a test for alcohol – on the outskirts of the port there was a police car, and every driver from the ferry checked for sobriety. Remembering the previous evening and feeling slightly headache, I was plagued by doubts. But nowhere to go – friendly people gave me to blow into a tube, checked my documents, apologized for the delay and wished a happy journey. Before my eyes lays the road to Stockholm.

Some time before that, I left a message on the forums Advrider and HorizonsUnlimited asking if anyone wants to meet on the first part of my journey. In HU some guy nicknamed Bubbla (Volkswagen Beetle name by Swedish :) invited to visit the town of Varberg, near the west coast of Sweden. I had my doubts about Varberg – it is the hook for about 500 kilometers. But I go for a walk in Stockholm and realized that my journey alone becomes impossibly dull – so I moved towards Varberg.

Passing halfway to Varberg, I realized that I fall asleep because of boredom, and selected in the Navi option “avoid highways”. Oh, I did not regret a single second! It was incredibly beautiful, I did not think that Sweden this emerald-green in summer! At every turn of perfectly laid asphalt, I wanted to make a stop and just enjoy the view. No pictures can not show what I saw, I think. Unfortunately, somewhere in that moment died a memory card in the camera, and I lost all the pictures that came before it, including Finland :(

In the middle of the day after 500 kilometers I arrived at the appointed place. And I met a man, whom I will never forget. Uwe (that guy Bubbla) turned out to be just a delightful person. He ran the technical matters in Vincent’s Bike Shop, and lived in a small house on wheels near. I think I can talk for hours about this man. In love with the Russia, German guy who lives in Sweden and is forever linked with motorbikes and travel. Man with a capital letter.

I was given a bed in the middle of bikeshop, at a comfortable leather sofa:

The next morning I started uploading a video on the Internets, and then went to the workshop, where I spent half a day. And it was just great! Uwe said that near, in town of Falkenberg, there is largest in Sweden meeting of fans of vintage cars, and after all the things is done we headed there. Beautiful cars, from the full original Eldorado to a barely crawling Belleview! Walking on Falkenberg’s streets, the smell of malt from the brewery in the air, talking about everything – great, just great. Here are some pictures from there, with a new memory card (I know that I’m bad photographer but I’m working on it! :))

Sometime I feel myself like in old american movie:

Every evening ended in the bikeshop kitchen, where we talked, talked, talked … and could talk forever, I think. Like meeting an old friend whom you have not seen for many years.

Uwe totally refused to take the money, and did not allow me to pay anywhere. It goes even to the defense around the cash register. In all my objections, he replied: “In Russia, with me they do the same.” Fortunately for me we did not go for shopping except in the supermarket for food and other things. In the last day I was able to somehow thank him, having been messed with the carburetors on V-Max, a motorcycle, which is waited for new wings. I think he was pleased with it :)

That is the flying sledgehammer:

Two days after work we went around Varberg, a places where I was breathtaking after each turn. The lakes, the hills, the sky – all adds up to a picture that is simply impossible to describe in words. Somewhere in these moments I think I fell in love with Sweden :)

It’s time to go further, the GOOZ is loaded on, sandwiches for me, waving goodbye, last fotos…

200 kilometers of rain – and here I am. On a finnlines bowl, which is carries me to Travemunde.

And here is the track with beatyful places and way to Malmoe:

I’m at Varberg, Sweden now. And I have no words to describe awesome things that happen. So I have to wait until it goes into straight text in my head :)

I sit in a bar remembering of times of old american movies. Round tables, round armchairs, randomly arranged in a circle around the stage. With that comes the music that I heard more than once in Chaplin’s silent films. Almost no one – night has not come yet and I enjoy a very good Finnish Lapin Kulta virtually alone. The floor felt tremors from the mighty power of the machine that pushes the ferry to the coast of Sweden.

I got two days of Finland behind my back.

Nasty weather at start, waterproof gear complex… I was gladly remembering Dilbert, which presented my waterproof glowes. Passing the border fast enough, confused and surprised face of Finnish border control “so, you can’t tell how many days will you stay in Finland?”, And excellent, but unusually slow-track given to me by navi with the option “to bypass the main roads”.

Helsinki, Rastila camping up on Karavaanikatu. Very good, if it were not disgusting WiFi. But the subway nearby – that’s the plus. Wandering in the the center of the city I accidentally found a very tiny place, which proved to be the smallest bar in Finland. Location that changed my mood upside-down.

Very interesting, awesome people. Classic phlegmatic bartender of small bar. Regulars of bar like the stereotypes of the film – two pretty girls, silent blond and sociable brunet; Heikki, drinking from 9-30 am (“the last time I drink on Wednesday and I was bad, I decided to try it on Tuesday”); Jukka, a beard (“Let Jah and beer will help you on the way); Max, who was born in the USSR, but moved with his family as a child in Finland, still sober for 5 years, pouring accumulated fellings in music and poetry. And a few casual visitors, all of whom were in their own finnish type. And I, voluntarily-involuntarily violated the habitual way of those friends. All this under the heavy metal and jazz pouring out of the speakers. A lot of talking, a lot of good words were said. Delightful people! Sorry, I could not find the time for a photo. I was in a hurry on the last subway train, bursting with positive from inside.

In the morning, a long time to pack my camp (the usual way of things have not yet developed), but still arrived an hour before the ferry start at the port – I was surprised – Jukka is working in the port! All were aware of my arrival (here, I do not even know who to thank – Polinochka or Jukka), I arranged an escort to the ferry, heard Good Luck at each post and in the end Jukka itself comes to say goodbye and to wish good luck again. Once I saw a cozy cabin with a porthole – I could only sigh. Thanks guys at the bar! Thanks Jukka! Thanks Polinochka! Thanks to the company’s St. Peter Line :)

… Music on the stage turned into jazz, and the tables began to fill with people. Evening comes into its own. I went on deck for smoking, staring at the horizon. 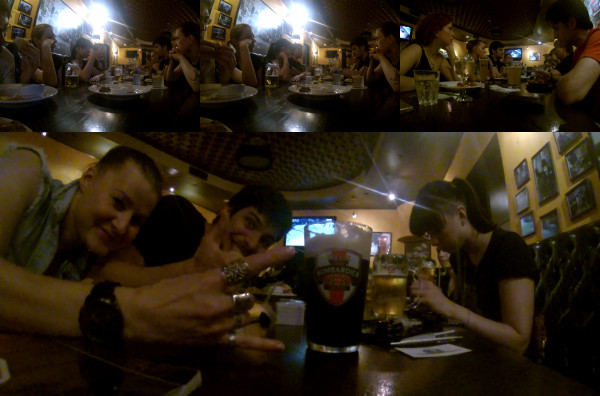